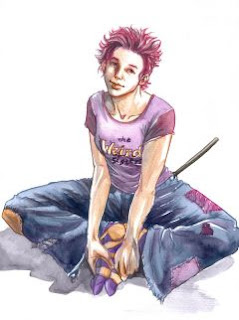 There are three days until the release of the final Harry Potter book- “Harry Potter and the Deathly Hallows”. I wanted to take a moment to applaud Ms. Rowling–

She’s written six very entertaining and engaging books. She’s created another world, as true and legitimate as Narnia or Middle Earth and with as much or more detail. She’s engaged readers of every age, race, gender and background. And she’s been able to continue to entice us through it all. Think of how truly difficult it must be to write not just one or two good books, but six. None of the books have sucked or been boring. No character has stopped being interesting. No one seems to mention this consistency much, but to me that’s one of her greatest achievements.

Now in the wee hours of Friday night/Saturday morning, millions will be stampeding to grab the final piece. Again, no one has suggested it won’t be good (I hope we know how spoiled we are by the quality of her story-telling) but instead the world is absorbed by Harry’s fate, Snape’s allegiance and the final chapter which promises to give the fate of all her major characters. I’ll be dressing up as Tonks (see pic) and heading to my local bookstore. I know that makes me a terrible geek but I don’t care. JK has earned my allegiance (and the loss of dignity) and I don’t want to miss the last brush with this wonderful literary world.