Went to New York this past week. I have been several times now but of course the city is still fascinating (an amusement park for adults). The only difference is that now, as I begin to figure out my way around, and things are familiar, the city becomes more comfortable- which is a strange sort of feeling for NYC. 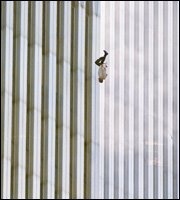 Interestingly, however, I have recently had cause to ponder the (unfortunately) defining moment of the city: 9/11. In my class, we spoke of the “Falling Man”; an article and a series of photos of a man who fell or chose to jump from the North tower on September 11th. This photo ran in thousands of papers on September 12th, but somehow after that both that photo and all mention of the jumpers become taboo. The photo humanizes the tragedy in a way that the burning towers, though horrible, cannot.
The writer of this article, and several other writers, have spent a great deal of time enlarging the photo to try to determine who the man is. There have been several guesses, and the families of those to whom he might belong have been very distraught to see the photo. Obviously it’s sad and scary, but also, suicide is against many people’s religion. Several families refused to believe their loved ones had jumped and subsequently been condemned to hell – understandably so. It’s sad to think that this picture adds a layer of agony on what must already be an unspeakable tragedy.

Also in the news this week, the “Freedom Tower” to replace the Twin Towers, is being constructed. I’d like to end this post on a positive note but it would be un-realistic of me to not be concerned. I understand why we need to rebuild what has fallen but I still don’t want my loved ones in that building. That being said, I know that even if they hit every building in NY, we would rebuild.