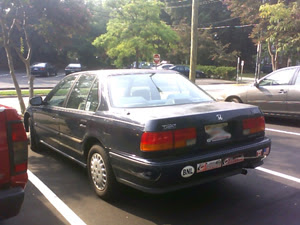 I bought my 1992 Honda Accord in September of 2001, (not a difficult time to remember). When I bought it it had 180,000 miles on it and my expectation was that it would get me through my college years. If I recall correctly I paid $3250 or thereabouts; the lean, college years and all that.

Two weeks from now would have marked my six year anniversary with that car (it lasted me two years past a long overdue end of my college career). I hit 225,000 miles on it last week. Both of those are great statistics. My car (Angel) has been all over the south and as far north as Ohio. I have had important conversations in that car, sung songs, cried and sweat (a lot- there was a AC but it struggled in the summer). I left that car with little paint and lots of bumper stickers, a nice and nearly new stereo and a very large and blood-like ketchup stain on the back seat (shout out: Cassie). It was truly a wonderful automobile.

And since the sincerest form of flattery is reusing an idea (or something like that), I traded in my 1992 barely blue Honda Accord for a snazzy, shiny 2001 green Honda Accord. I know, no imagination.

Before I sign off a quick note: I feel incredibly guilty buying this car. Even though it was past time to upgrade, this new car seems like ridiculous luxury and excess. And I’m sure I’m going to crash it first thing tomorrow- if it doesn’t get stolen tonight.