Once upon a time I bought a book in my favorite little bookstore in Manhattan (The Strand, a few blocks away from Union Square). The book was about the history of the earliest settling of Manhattan, by the Dutch. I agreed to let my brother read it first and therefore have only just finished it, nine and a half months later…
The early part of the book was a little slow. It detailed the very early history of the settlement (including the eventual city of Albany and several NYC boroughs) so it took awhile for me to get into the book. But as the city filled in and more of the names became recognizable the book became much more rewarding.

The Dutch were very open people and a century before English settlers were fighting for fundamental freedoms, the Dutch were giving many of them- most importantly, freedom of religion and a welcoming attitude to foreigners. This early legacy helped to create an attitude that lead millions of immigrants through Ellis Island, but also helped to form our earliest declarations of freedom. 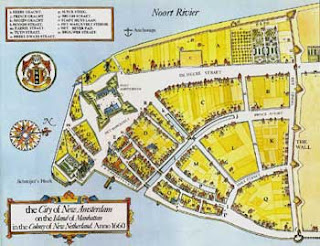 I know I’m going on a bit- I apologize. The point is, there was a section in one of the last chapters that mentioned 9/11 and did a great job of driving home the point that the heart of this small town lay within a mile or two from where the towers fell. New York, or the New Netherlands as they were known then, was able to build a settlement free from religious persecution (almost) and open to all types of people. More than 300 years later that land was attacked by people who still didn’t get, or couldn’t accept the fundamental principles that formed New York. They weren’t attacked for their ideals in 1661 (the English took over for the trade routes) but they were in 2001.

I’m going to NY in a few weeks and I’m hoping to go to Ellis Island and perhaps the NY City History Museum (yes, there is one). I’ll give you a review if it’s any good. Going to see ‘Wicked’ too- can’t wait!